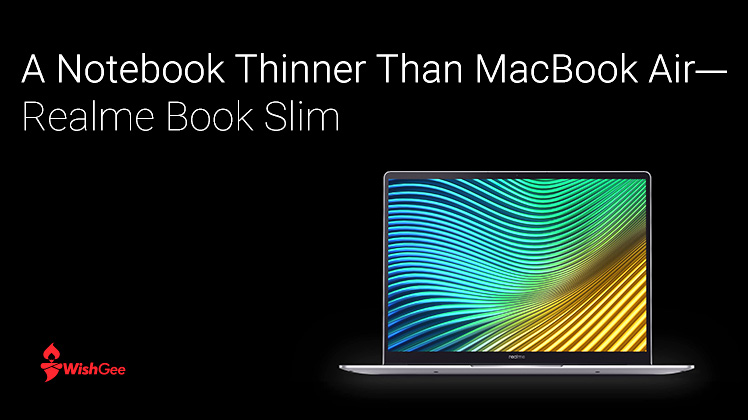 Yep, it's here. A notebook that rivals MacBook Air's coveted slenderness—the Realme Book Slim. Realme is already a giant in the smartphone market in India. It is a sub-brand of Chinese electronics conglomerate BBK Electronics Corporation. The brand holds a 15% market share in the 2nd quarter of 2021 in India. You'll find an array of electronics items being manufactured by Realme, like TVs, wearable gadgets, power banks, and others. Already a big name in the smartphone market, they are eyeing the laptop market with a wide range of products in various price segments with different specs and features.

What to look out for in REALME BOOK THIN?

So, down to the facts, folks. What is Realme offering in its claimed Realme Book Thin that is lighter than MacBook Air? Though Realme is not one of the first smartphone companies to enter the laptop market, it steps up its alley by entering the below ₹60,000 price segment with a bag full of new features and updated specs with its August 2021 launch.

It is just 1.38kg light and is 14.9mm thin making it thinner than Apple's Macbook Air edition which measures 16mm. The 14-inch 2K Ultra-HD screen with 157 PPI delivers good image quality. In terms of performance specs, the Realme Book Slim is available in two configurations in India一11th Gen Core i3+8GB+256GB and the 11th Gen Core i5+8GB+512GB. For charging, it uses a powerful 65W USB-C fast charger that takes slightly more than one & a half hours to make it fully charged. The i3 processor version uses Intel® UHD Graphics. The i5 processor version comes with a built-in Intel Iris® Xᵉ high-performance graphics card and can give satisfactory performance in designing, gaming, and entertainment. The DTS Stereo Surround Sound enables you to enjoy an all-around cinematic sound effect without any distortion. It also promises an 11-hour battery life. However, its overall performance is subject to user reviews post its launch.

What does Genie say about REALME BOOK THIN?

So guys, in all honesty, if you think you'll get a MacBook Air equivalent at a bargained price from Realme, trust us, Genie would not suggest that in entirety. However, where does Realme Book Thin packs its punches, is certainly not only in its slenderness一which is indeed thinner than Macbook Air but in some other specs, as well. First off, it beats in display size. Realme Book Thin offers a 14-inch display vs a 13.3-inch display of the MacBook Air. Secondly, it has 6 MB Cache memory which is more than Macbook Air's 4MB. Whether the i3 or i5 version, the Realme Book Thin uses 11th Generation for both processors while MacBook Air uses 8th Generation i5.

Realme Book Thin's entrance is most likely a balance between being premium and affordable at the same time. It has a premium feel with a minimal look and metallic unibody. It comes in a range of colors with a matte finish, which gives it a similar appearance to the MacBook's aesthetic. The affordability part definitely lies with its hardware features.

The place where Realme poses itself in the market is by leveraging its design as being lighter than that of the MacBook Air. This is indeed its USP. However, its actual rival is Redmi's range of laptops which is again another rival competing in the smartphone market as well. Genie will keep an eye on its release and speculate further on the pros and cons. Till then, keep an eye on our weekly blog posts and get your wish fulfilled at WishGee.